"Tenet" is  Christopher Nolan's latest action/drama that was supposed to be released during the summer.  It is the first major release since the movie theaters reopened.  World wide is made over $200,000,00,00.   In the US it was only $20,000,000 which is a smaller figure than was expected Pre Covid 19.

Mom saw a long feature on it when she saw "Star Wars- The Rise of Skywalker" and she thought it was strange.  That is what the movie is like.

Joining him was "Neil" played by Robert Pattinson.  Mom thought it was the first time she heard him with his native British accent since his role in "Harry Potter and The Goblet of Fire".

The cast is rounded out by Michael Caine,  Clémence Poésy, Martin Donovan, and Kenneth Branaugh.

I felt the movie was hard to follow at times.  Lots of action on beautiful locations but in the end it was really hard to watch.  It was good movie so if you like intricate thrillers "Tenet" is not bad. 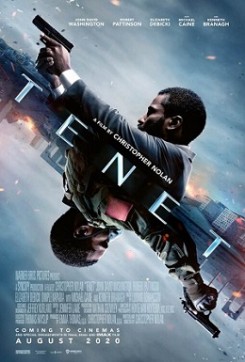